“A horizon where the perspective was not three-dimensional but multidimensional in bright shades of yellow, gold and white contours. Geometric shapes in the same shades moved elegantly like a dance where the arms completed perpendicular circles in a gentle rhythm.” Rodrigo Garcia Dutra, 2015

Marian Cramer Projects presents the second solo exhibition in Amsterdam by Rodrigo Garcia Dutra (Rio de Janeiro, 1981). In the Brazilian neo-concrete tradition of artists, Art and Life are not separated but assumes an intricate web of relations among subjects and experiences. The artist spent time in the Amazon rainforest and participated in ayahuasca ceremonies. He was mostly interested in the Shipibo tribe’s geometric patterns as energetic weavings translated into shape and color and without knowing he was led to layers of old civilizations, buildings, geometric forms and architectures of light. For the ‘Hidden Nature’ show he persists with painting and geometric abstraction as a core investigation that unfolds into architecture and collective unconsciousness. He relates to the Brazilian artist Lygia Pape, through Carl Jung archetypes, dealing with ancestral images of the unconsciousness. In his video “Fluidics II” the translation of Lygia Pape’s description of her book of creation is combined with other images giving it a new perspective. Shandeinaum, the sound piece in the show is collaboration with his brother, Matheus Garcia Dutra, using sounds recorded in the Amazon. There’s also a text by Madelon Van Schie made through conversations with the artist and a downloadable PDF of his own text and images. 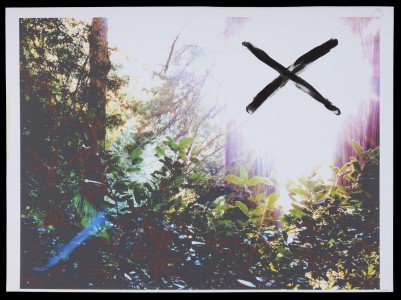 We Are Guided by the Same Stars is an installation by artist and musician and Richard Bolhuis. The installation consists of a sound installation, film loops and paintings.

Marian Cramer is pleased to present the first solo exhibition in the gallery by the London based Brazilian artist, Rodrigo Garcia Dutra (Rio de Janeiro, 1981) who is currently in his final year of an MA in Sculpture at the Royal College of Art, London.

Garcia Dutra is interested in the origin of ideas and how form travels in time and space. He also looks into objects overseeing the complex relationship in how we shape aesthetics and how they shape us in return. He sees this changes of paradigm as a cultural projection that mutates values in the course of time. The new aesthetic layer no longer represents the original intentions of its creation.
For his first site-specific show in Amsterdam, Rodrigo Garcia Dutra explores the tension between representation and abstraction in his paintings. He creates an ambiguity between the painterly figurative and the photographic device. The geometric patterns of Moroccan stone pavements are captured, as a stand up snapshot and after being painted resembles aerial views of an abstract landscape. The lexicon of abstraction is embedded then through the painting of real places. The subject is the Jamaa el Fna Square, a market place in Marrakesh’s medina. It remains the main square of Marrakesh and is used by locals and tourists. It’s open 24 hours a day, 7 days a week. During the day it is predominantly occupied by orange juice stalls, youths with chained Barbary apes, water sellers in colourful costumes with traditional leather water-bags and brass cups as well as snake charmers who will pose for photographs for tourists.
The show will also feature his charcoal tracings from the motifs found in a West African Kente cloth. Those works titled TABOM CONCRETO (When in dead night thy fair imperfect shade) were shown in July 2013 in the show ‘Open Cube’, at White Cube Mason’s Yard. He references the Brazilian Constructivism and Neo-Concretism through the European avant-garde myth itself being inspired by the aesthetic of other cultures. Also cites a book on Japanese aesthetics embracing darkness and shadows.
Complementing is a video piece titled ‘Abstract Eruption’ made through overlay of an animation that suggests a breathing of circles and squares over a compilation of found footage of volcano eruptions from youtube.
Rodrigo Garcia Dutra lives and works in London. He holds an MA in Fine Arts from Central Saint Martin’s College of Art and Design, London (2009) and is currently in his final year for a MA in Sculpture at the Royal College of Art, London. In 2010, he was awarded the Fundação Bienal de São Paulo, Programa Brasil Arte Contemporânea. Recent exhibitions include ‘Notes to Self’, Royal College of Art, London (2013); ‘Outras Coisas Visiveis Sobre Papel’, Galerie Leme, São Paulo (2012); ‘Theory of the City or the Possibilities of an A4’, ISCP, New York City, USA (2011) and ‘17 Ingredients: Measures of Autonomy’, BASH Studios, London (2009).

film where Adriano Pedrosa speaks of the open cube concept at White Cube, London, in which Rodrigo Garcia Dutra’s work was included: