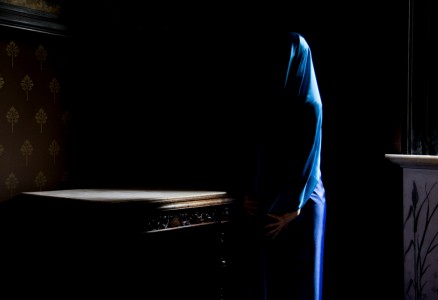 MARIAN CRAMER PROJECTS is honoured to present a series of new photographs and video work by the Turkish, London-based artist, Güler Ates. This is the artist’s first solo exhibition in the Netherlands in the year Turkey and the Netherlands celebrate 400 years of diplomatic relations between the two countries.

Displacement lies at the heart of Ates’ work. She pursues the potential of pattern and motif within Islamic art, an echo of her Eastern heritage, which is often integrated in lavish architectural spaces. This functions as concealment and exposure, thereby alluding to the theatrical.

Ates work starts with film and photography. Yet with a subsequent layering of imagery – resulting in a disruptive blur of cultural perceptions – a veil is created. Her work combines performance and site-responsive activities that merge Eastern and Western sensibilities. There is a sensuality that is rich and complex revealing an emotional comment on the woman who inhabits the places in the work.

Ates’ is inspired by Dutch old master paintings such as Vermeer. The mastery of light, composition and color are recurring elements in her work. Her unrecognizably veiled female figures lighting up against a dark background create the fluid, floating appearances that have become tantamount to Ates’ work.

Born in 1977 in Eastern Turkey, Güler Ates lives and works in London. She graduated in 2008 from the Royal College of Art with an MA in Printmaking. Her work can be found in the Victoria & Albert Museum’s print collection and was recently shown in Great Fosters, Egham, UK.

Güler Ates will also be presented among other artists by

A Shuttle bus will operate between Re:Rotterdam and Art Rotterdam every 20 min.