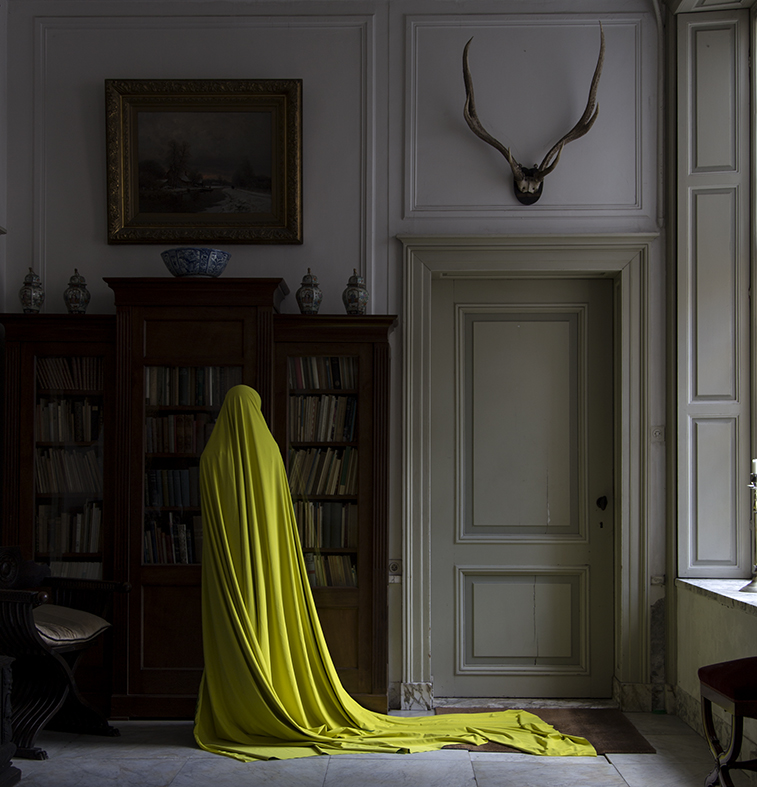 Güler Ates has always been inspired by the hidden stories and many layers of history associated with the architecture of buildings. During her visit in The Netherlands, she was struck by the grandeur of Huis te Warmond. She was inspired by the romantic 18th century surroundings and the strong feeling and presence of the history guarded by the walls of the house. She has been looking at themes, including 17th and 18thcentury Dutch interior painting and incorporated these aesthetic impulses in her recent work. Ates is inspired by paintings from the Dutch Old Master. The darkness and intensity of the works on display are reminiscent of these masters of painting. Ín this way she comments on the Western notion of Orientalism and the effects of the cross pollination of cultures on female identity and architecture questioning the relationship between the veil and the West, and exploring the representation of the veiled woman, which refers back to the European traditions as found in the work of Old Masters such as Vermeer. Ates has previously implemented projects at the following architectural settings:Victoria & Albert Museum, London; Cité Internationale Des Arts, Paris; Leighton House Museum, London; Great Fosters (the former royal hunting lodge of King Henry VIII), Egham; Royal Academy of Arts, London; and City Palace, Udaipur, India. Guler Ates (Mus, 1977), graduated from the Royal College of Art with an MA Fine Art in Printmaking in 2008. Currently, Ates is Digital Print Tutor at the Royal Academy Schools. She has exhibited work in Britain, Turkey, India, Japan, France, the Netherlands, and the United States. Her work is collected internationally and her artworks are included in numerous public collections, including the collection of the Victoria and Albert Museum, Huis Marseille and the Royal Academy, London. Güler Ates works and lives in London.