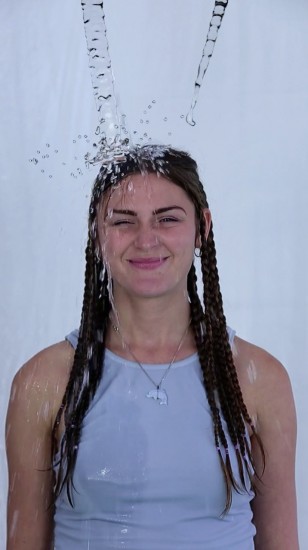 “I open my hands, I want to let go of the slimy, and it sticks to me, it draws me, it sucks at me. Its mode of being is neither the reassuring inertia of the solid nor a dynamism like that in water which is exhausted in fleeing from me. It is a soft, yielding action, a moist and feminine sucking… Slime is the agony of water.” Jean-Paul Sartre, Being and Nothingness: An Essay on Phenomenological Ontology, 1943

Adham Faramawy is an artist working across media to describe embodiment and what it is to be physically present. The body is central to his practice and is approached as a primary, sensual site. For his first solo show at the gallery, Faramawy has made a series of works which further respond to and explore Sartre’s 1943 writing on slime, where the properties of slime are problematized as abject and trans-feminine. Faramawy uses this precarious construct as a departure point to investigate what it is to inhabit and feel through a body as well as construct identity and a sense of self in relation to a digital culture of mediated images.

Adham Faramawy (1981) is a Dubai-born, London-based artist of Egyptian origin. He is a graduate of both the Slade School and the Royal Academy Schools of Fine Art (2013). Recent exhibitions include Hydra, Cell Projects, London, E-Vapor-8, Site Gallery, Sheffield, Pre-Pop to Post Human, Hayward Touring, Half Abstract, David Roberts Art Foundation and Silica at Galerie Sultana, Paris. Faramawy’s video works have been included in screening events such as Flatness, Oberhausen Film Festival, Syndrome of a Decade, Ikono Film Festival, Diamond Dust- A shifting grammer of originality, Circa Projects, Edinburgh Arts Festival and 21st Century Pop at the ICA, London.