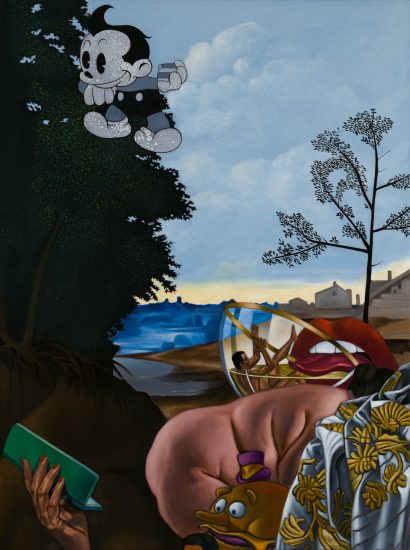 The game-changing, cathartic experience of becoming a parent triggered Jack Shure (Boulder, Colorado, USA) to develop a body of work that serves as an ode to this cosmic adventure. Although the most natural happening for all living beings, the event never fails to feel like a mysterious act in which the universe shows its powerful magic in the most apparent form. Proving all the cliches to be awfully true, the creation of new life sends the mind spinning into new directions, prompting the examination of never-before considered scenarios and questioning of completely unknown feelings or realizations. And the series of paintings comprising DAD BOD, which the Colorado-based artist is presenting at Marian Cramer projects in Amsterdam, is the visual byproduct of the self-observations of the consequent physical and emotional changes.

“My work is distilled reflection of the significant moments, lessons, and inspirations of my life, pulling imagery from both my childhood, currently, and perhaps the future simultaneously,” Jack Shure stated a while ago, and these words had never been truer than with this particular body of work. Deeply personal and unpredictably intense emotional and physical states seemed to have imposed a whole new domain of visual metaphors, symbols, shapes, and designs that would correlate with the atmosphere of the changes he is observing and experiencing. Clearly informed by the overwhelming visual influx of life in the 21st century, the somewhat psychedelic collages are featuring everything from junk food and figures or body parts, over crossbones and spiderwebs, to cartoon characters, archetypal Italian landscapes, historic iconography, and indigenous art. Yet, within such eclectic selection, the clues to personal stories are placed, touching on concerns regarding health issues and body transformation, interest in art history and traditional techniques, all the way to the fear of the unknown, and the refreshed attitude towards the ever-changing world around. In that regard, the crossbones represents the fear of food developed over the years of battling an unusual health condition (Kiss The Dirt, When The Body Speaks, Holy Fear, all 2022), the eyes evoke a presence of creator-like notion that is overseeing everything (When The Body Speaks, No Poison, Holy Fear, all 2022), and scissors symbolizing genuine fear for wellbeing (As Inside So Outdoors, Wash Your Feet, all 2022). Besides carefully choosing the colors, contrasts, and images, Shure is also constructing almost bodily contrasts between the sections rendered using different approaches, employing the flatness of the ala prima method to accentuate the warmth of grisaille underpainting shining through voluminous elements or sections rendered with cross-hatching technique.

The new mental setup defined by the changed concerns and reshuffled priorities provides a bridge
between the interest in visual and other influences that shaped the artist and the deep appreciation for the most traditional, almost ritualistic painterly techniques and materials. Urged to react and reflect on the increasingly rapid life changes, the creative process is fueled by his direct response to the way that the formal elements and/or chosen methodology resonates. So, while the subject matter is exploring the most natural yet somehow mystic transformation, the works are going deep into the exploration of oil painting tradition. Past the grisaille, all the way to the use of animal protein emulsion (Wash Your Feet, No Secrets, both 2022), Shure’s systematic efforts towards self-acceptance inform the use of the most rudimentary, primitive methods and substances. Such a raw, almost alchemy-like approach is adding a somewhat cryptic value to already arcane-looking compositions. Obscuring the subject matter even further, the technical aspect adds to the atmosphere that the artist is looking to capture while focusing on the form, light, and shadow. Simultaneously taking the viewer on a journey inside his psyche and heart as well as through the archaic painterly procedures, Dad Bod essentially questions the boundaries of oddities and norms, ugliness and beauty. Starting from the premise that one can not exist without the other, Shure is tackling existential concerns armed with joy, playfulness, and lighthearted interactions as he celebrates the greatness and exceptionality of “the vessel for the soul”. 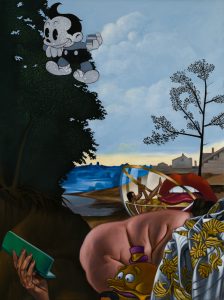 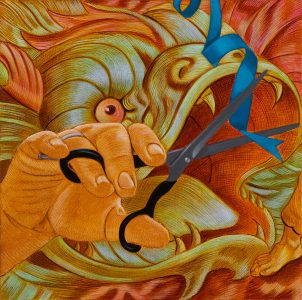 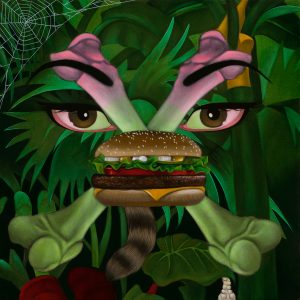 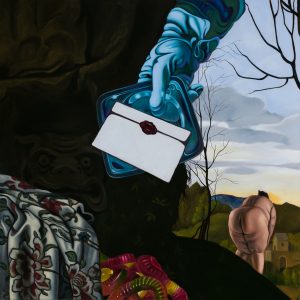