IN PRESENCE OF THE ARTIST(S)

Open: The Gallery is open by appointment Monday to Saturday 11am-5pm

On view at Marian Cramer Projects in Amsterdam, The Netherlands, Transmutations places the three artists into dialogue around their expressive use of color and light, and their distinct versions of contemporary painting. All three artists are ingeniously  apt at creating a fine sense of depth, building a perspective on the image surface, manipulating light in a great manner and all three work with polished surfaces resulting in the sensation of voluminous, luminously bright shapes.

Utilizing the materiality of paint and the viscosity of oils has been a key element for painters’ practices over the centuries. Starting with Giotto in 13th century Italy or Peter Paul Rubens in Belgium, elaborated by Diego Velázquez in Spain, and Rembrandt or Johannes Vermeer in The Netherlands to Picasso and Condo, the need to accentuate the physical attributes of the imagery has been driving the progression of techniques and feeding the sprouting of new painterly styles and movements.

As a child, Arjen was fascinated by of the techniques of Rembrandt, Jacob van Ruysdael, and was inspired and influenced by the works of Picasso, Dali and Condo. Simultaneously Arjen kept painting and sketching while searching for his own unique style creating a highly abstracted representation of the human body, reducing it to a few recognizable features, such as eyelashes, hair, or waist. Rendered with utmost attention, constructing crispy clean, and sharp images which evoke the perfection of 3d modeling software, Arjen deconstructs the body opening new chapters exploring the human condition. Arjen works and lives in Friesland, Netherlands. 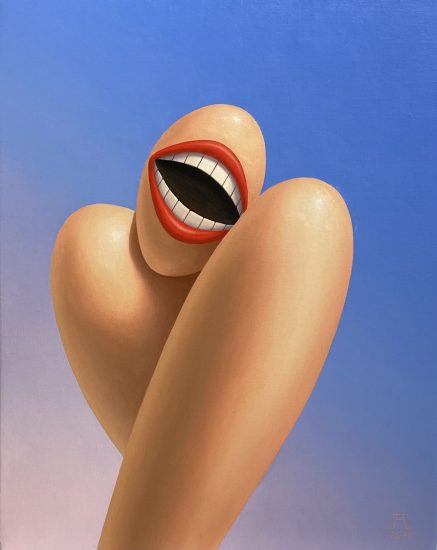 Simplifying imagery to a cartoonish state without losing the specificity of the objects he is portraying, Browning’s paintings often depict imaginary spaces rendered without figures, while hinting at their presence as if they have just walked out of frame.

For Transmutations Ryan Browning selected past works to draw from to form a starting point for his new body of works; shrine-like abstract forms centered in the painting and surrounded, covered and penetrated in a cartoony manner by objects.

Lately Ryan Browning has been inspired by sunset or dusk, creating a transitional, dreamy feel, emphasizing transitional and bold solid colors combining abstract art with Surrealist fantasy. Ryan Browning’s style of flattened, layered subject matter, painting in both gouache and oil evolved from the tension between his fanciful, poetic impulse and his vision of the harshness of modern life.

Attilio Esposito paintings are influenced by many artists from Pontormo, Tiepolo, Bernini, Rubens to Kandinsky, Malevich, Mirò, amongst others, attempt to create suspended images in the embryonic state that could find their development within the personal thought of the observer.

Esposito builds a personal link between abstraction and stylistic academia painting, condensing movements, lights and colors through the metaphysic theatre of the canvas. The works comprising Transmutations are elevating such efforts to new heights by exclusively focusing on the depiction of the modeling materials and their spatial properties. Employed as a connecting element between abstraction and representational figuration Esposito’s works playfully explore the existential relationship between the material and pictorial sphere.

Attilio lives and works in Italy.