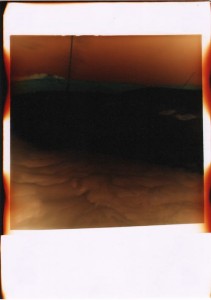 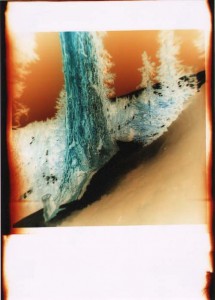 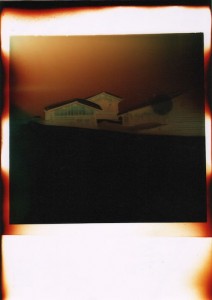 As part of this year’s Unseen Photo Fair & Festival​, we are happy to invite you to a talk by Manus Groenen​ on Daniel Lipp’s Mountain Years. The talk will take place tomorrow evening, Thursday the 24th of September from 20:00 – 21:00, at the gallery.

Lipp uses a handmade camera to create a diaristic recording of his immediate surroundings and of specifically chosen places. This camera shoots directly onto photographic paper and therefore creates an indexical recording of a given time and space. The resulting photographs are, at times, highly abstracted images, with an unreal, uncanny quality due to the inverted tones and over- or under-exposure. As a result of the long exposure time, the pictures are devoid of movement and action.

The larger series is concerned with different genres of representational painting, such as portraiture, still life, and landscape. Mountain Years focuses on a romantic notion of landscape painting. The series was taken on a stay around Frauenkirch, near Davos, Switzerland, on daily excursions to the Stafelalp: a remote place in an Alpine area where the German Expressionist painter Ernst Ludwig Kirchner arrived in 1917 to recover from illness, and shortly thereafter started painting his notable mountain pictures.

Daniel Lipp (b. 1982) was awarded the Selina Chenevière Fellowship Prize upon graduating from the Royal Academy Schools in 2014. He previously studied at Goldsmiths College. Recent exhibitions include FOMO at Marian Cramer Projects, Amsterdam and Slowmo Drama at Southard Reid, London

Manus Groenen (1986) works as an art theory teacher at the University of Utrecht and the Fontys Academy of Arts in Tilburg. He is also a freelance curator and critic. His earlier curatorial projects include Alpha60projects.com, an online exhibition space with twelve monthly collaborations of writers and artists, and a program of events and exhibitions for the artist initiative Locatie Z in The Hague, co-curated with Debbie Broekers​.